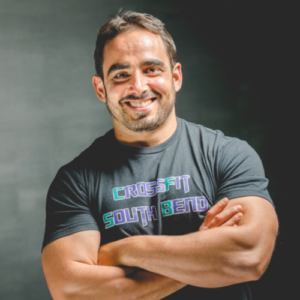 Robby Gustin, PhD, FDN-P, is a head nutrition coach at CFSB Nutrition in South Bend, IN. He received his B.A. from Columbia University, and his PhD in Philosophy from the University of Notre Dame. While in graduate school Robby was diagnosed with Graves’ disease (autoimmune hyperthyroidism), and it was the experience of naturally healing that condition that made him want to be a health coach full-time who could help others reclaim their health. Robby firmly believes that if you’re going to reclaim your health it starts with food and a good solid foundation like the Whole30 program.

Robby thinks one of the most powerful tools for reclaiming health is getting your lifestyle in order. This means adopting a healthy diet, getting adequate sleep, proper amounts of exercise, and lots of mindfulness/stress reduction. Robby has seen first-hand how these simple (but not easy) changes to one’s life can make a huge difference to one’s overall health and life.

In his spare time, Robby enjoys snowboarding, cooking, the beach, powerlifting, philosophy and being outdoors.

“Both in my coaching practice and in my own personal life, I’ve seen the power of the Whole30 to change people’s lives for the better. My goal as a health coach is to help people achieve goals that they previously thought unachievable by changing their lifestyle for the better. I firmly believe that there are no shortcuts to any place worth going, but I believe that Whole30 is a fantastic starting point for the vast majority of people on their journey back to health.”